When he can stop thinking of her and to help him stop living in the past, Ned gets the Simpson family to help remove all the reminders of Maude he has around the house. Only one item misses getting thrown into the chipper, a sketchbook that contains Maude’s vision of a Christian amusement park called “Praiseland.” Ned goes on a quest to build this amusement park, which, opens to lackluster reviews; describe as the “height of tedium”. When suddenly a miracle occurs, as a Maude mask floats in front of the Maude statue. It is quickly discovered that anyone who stands in front of the statue has visions. Is it truly a miracle, or just the passing of gas? 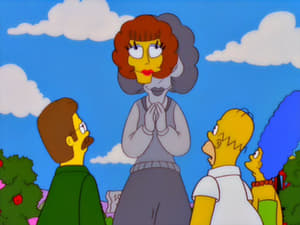