a). “G-G-Ghost D-D-Dad” Homer dies because he’s eaten the deadliest plant on Earth, broccoli. When he arrives at the Pearly Gates of Heaven he finds he cannot get in because he hasn’t done one good deed all his life. St. Peter gives him 24 hours to perform at least one. b). “Scary Tales Can Come True” Bart and Lisa are abandoned to the deep dark woods. With a book of Fairy Tales to guide them, the pair navigates their way past a troll and three bears eventually arriving at the house of the witch who lives in the gingerbread house. Meanwhile, Homer and Marge change their minds and he goes in search of the children giving Rapunzel a haircut along the way. c). “Night of the Dolphin” Lisa lets a dolphin go free but it turns out this particular dolphin is the dolphin’s king. Now that he has his freedom he plots to take his revenge on the land dwelling humans. Soon the dolphins are back on land where they’ve belonged all along and the humans are banished to the sea. 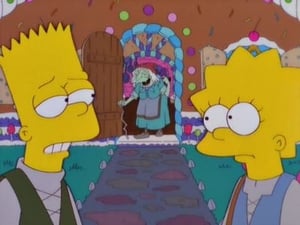