Butters finds out what his father has been up to late at night and when his mother hears, she overreacts by trying to kill her son and then herself back at home. After returning home and forgiving her husband, she realizes what she has done to her son and they spin a story to the media to cover their tracks. Meanwhile, Butters obsesses with returning home so that he can join his parents for an anniversary dinner at Bennigan’s. 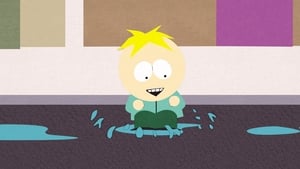