It's Never Too Late

A mob war between crime bosses Rupert Thorne and Arnold Stromwell is nearing its end, and comes to a climax when Stromwell is set up to be killed in an exploding restaurant by Thorne. Batman saves him at the last moment, and persuades Stromwell to use his fall into disgrace to help him bring Thorne in, mostly for the sakes of his wife, his ill son and his estranged brother, as well as his own. 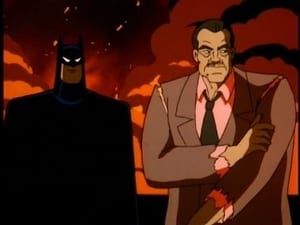